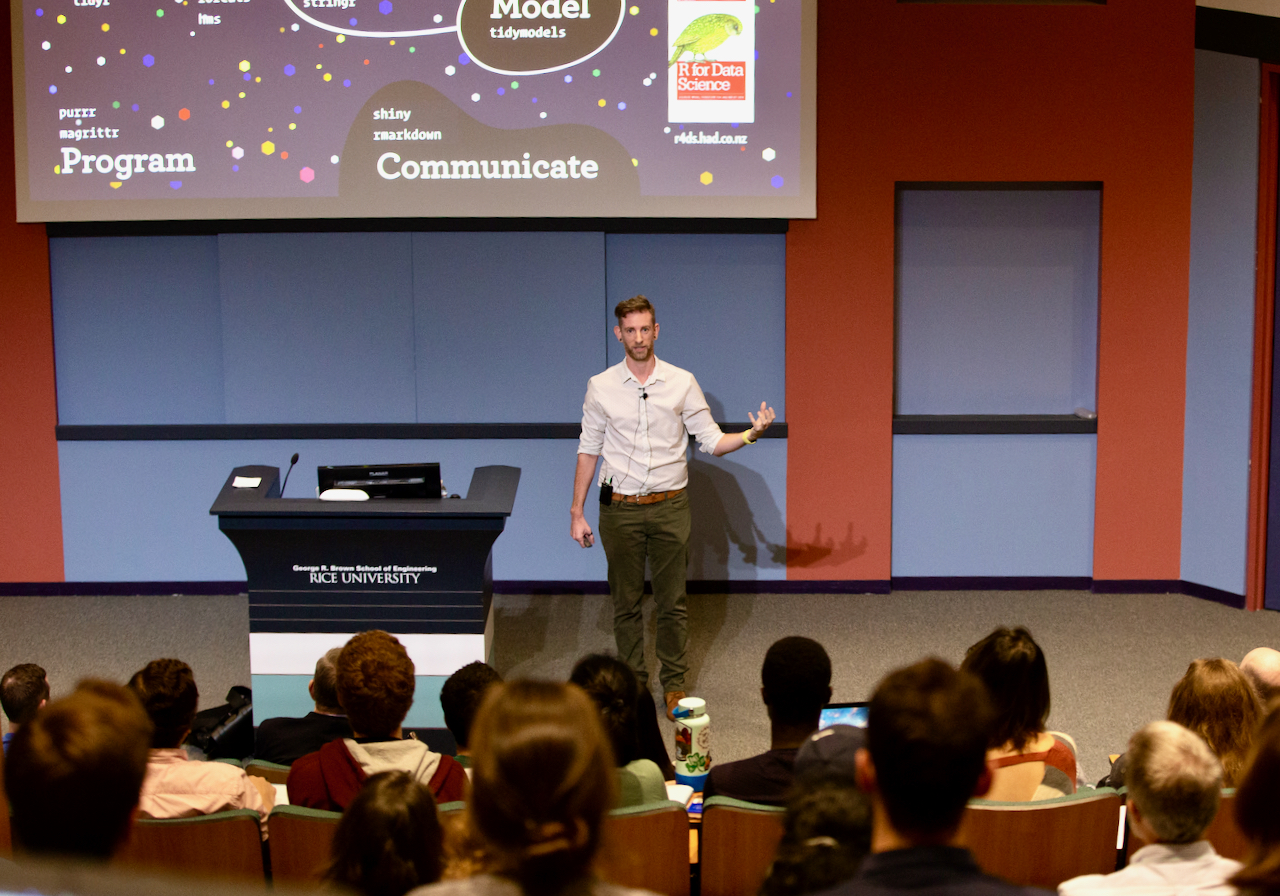 Having hit 40, data scientist Hadley Wickham has undergone a rather hopeful and somewhat premature midlife crisis.

“I asked myself, ‘What the hell have I been doing for the last 10 years?’ The answer I came up with is I’m not doing science, I’m doing design,” said Wickham, adjunct professor of statistics at Rice University.

On Nov. 22, Wickham delivered the first D2K Distinguished Lecture, a series sponsored by the Center for Transforming Data to Knowledge at Rice. His lecture, “Designing Data Science,” mingled autobiography and a pep talk to students of data science. In his introduction, Reginald DesRoches, the William and Stephanie Sick Dean of the George R. Brown School of Engineering, referred to Wickham as a “data science rock star.”

Wickham won the 2019 COPSS (Committee of Presidents of Statistical Societies) Presidents’ Award, known informally as the “Nobel Prize of Statistics.” Since it began in 1981, the award has largely recognized theoretical contributions. This year, for the first time, it was given for practical applications.

Wickham identified four qualities of good design in data science. It is iterative and affective, embraces constraints and accepts the blame for its mistakes. “Data science is not 100 percent about writing code,” he said. “There’s a human side to it.”

He created such R packages, known collectively as the “tidyverse,” as ggplot2, plyr, dplyr, purr and reshape2, and now is the chief scientist at RStudio. R was created at the University of Auckland by Ross Ihaka and Robert Gentleman, and RStudio is a company that develops computing environments to be used with it.

“My goal in life is to create a pit of success, which is different from a pinnacle of success. We want users, when they’re using our programming tools, to be able to use them easily, to slide into them,” he said.

When COPSS presented Wickham with its award earlier this year, it recognized him for “influential work in statistical computing, visualization, graphics, and data analysis,” and for “making statistical thinking and computing accessible to a large audience.”

Wickham specified his own values as a designer: “practicality, ingenuity, empathy and a concern for appropriateness.” He added, “Programming is not just for nerds. It is for everybody.  When you write good software, you’re allowing others to take advantage of your ideas. You’re making something that can help them.”

Wickham was an assistant professor of STAT at Rice from 2008 to 2012, and now is an adjunct professor at Rice as well as Stanford University and the University of Auckland in his native New Zealand.

In 2015, Wickham was named a Fellow of the American Statistical Association. COPSS consists of the presidents, past presidents and presidents-elect of primarily Northern American professional societies of statisticians.