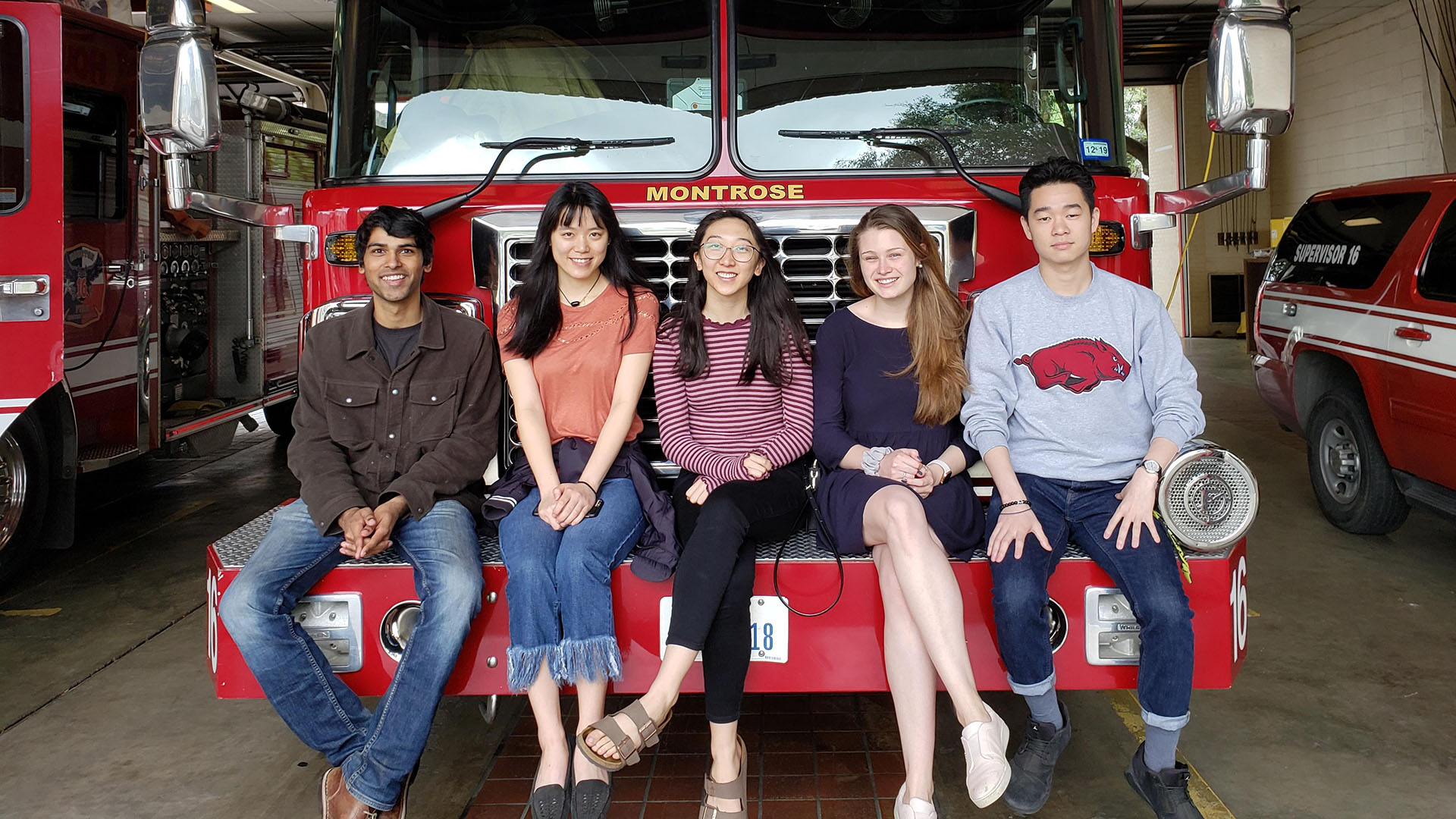 The added ambulances would also cut down on citywide “chain reactions” that force emergency personnel from distant stations to respond when local medics or fire personnel are tied up.

The recommendation is the result of months of number-crunching by students at the Brown School of Engineering’s Center for Transforming Data to Knowledge, aka the D2K Lab. Spearheaded by Genevera Allen, an associate professor of electrical and computer engineering, statistics and computer science, the D2K Lab provides opportunities for students to work directly with companies, academic labs, government agencies and nonprofits to translate data into actionable ideas.

The fire department approached the D2K Lab last year to help formulate a vehicle allocation model, based on conclusions from the data, for its 88 engines, 95 ambulances and 36 ladder trucks. All of them can be called upon to respond to medical emergencies.

Recent Rice alumnus Ashwin Varma, poised and prepared, gave a comprehensive presentation to the Houston City Council’s Public Safety Committee today to describe the data-intensive process by which the Rice team developed its analysis. He and his fellow team members — Shannon Chen, Erin Kreus, Jesse Pan and Lynn Zhu — all majored in statistics and graduated in May. They were advised by Anastasios “Tasos” Kyrillidis, Rice’s Noah Harding Assistant Professor of Computer Science.

The students analyzed data on more than 2 million HFD emergency calls between 2012 and 2018 and measured not only response times by ambulances and fire trucks but also how chain reactions lengthen times when personnel and vehicles have to respond to emergencies outside their own districts.

“If you can reduce the number of times that any given station calls for help outside of its territory, you are preemptively preventing a chain reaction from occurring … not just in the district (where) you added the vehicles, but in other districts as well,” Varma said.

That, he said, motivated the team.

“Although it’s hard but not impossible to find ways of moving vehicles around to improve the operating performance of the fire department, it’s actually quite easy, through limited additions of ambulance capacity, to plug some of the gaps in HFD’s operating profile and create substantive improvements in things like response times and distress fractions (calls for help from outside territories),” Varma said.

“We looked at the dispatch algorithms, and we looked at years of past information seeking to see if we can find a disruptive strategy that we could use to minimize the risk at an incident and match the appropriate resource with the risk of that call type,” said Assistant Fire Chief Ruy Lozano, who joined Varma in the presentation. While the results are theoretical, he said, “It is opening the door for us to make a good, data-driven evaluation of how we do business.

“This is a really good first step to be able to use empirical data to drive our future decision-making,” Lozano said.

On the whole, the results show the city’s emergency responders are already doing a great job to protect citizens, Varma said. The students also agreed HFD’s quest to improve its response to medical emergencies is worth pursuing. Fire-related calls account for only 12% of those received by HFD. “The vast majority are EMS incidents,” he said.

“However, 58% of the HFD’s fleet consists of engines and ladders; 42% are EMS vehicles,” Varma noted. “Fire incident volume has been relatively constant since 2012. The increase in the total incidents is completely driven by EMS call volume. That has increased over 20% in the last six years.”

He noted calls peak between 11 a.m. and 6 p.m., when commuting workers raise the city’s population by more than a million people. “If changes need to be made in the deployment strategy, they may only need to be made at certain times of the day,” he said.

One of the team’s final tasks was to build a simulator that incorporated all six years of call-and-response data, dispatch protocols and travel times to see if it would match how the department actually performed (it did) and then use it to “stress-test” variations.

“It allowed us to … plug in any given distribution of vehicles and tell the fire department, ‘This would be an improvement, this would not be an improvement,'” Varma said. The simulator helped pinpoint southwest Houston as the neighborhood that would benefit most from additional equipment.

Varma told the committee that firefighters he and his teammates talked with agreed with the results. “We asked them, ‘What do you think of our conclusions?’” he said. “They all (said), ‘Yeah, the five stations you mentioned, you should put five ambulances in. If you had asked us that three months ago, we would have told you the same thing.’

“That was great, because it demonstrated that the data-driven strategy matches up with the intuition of people on the ground who have been doing this for years,” Varma said.