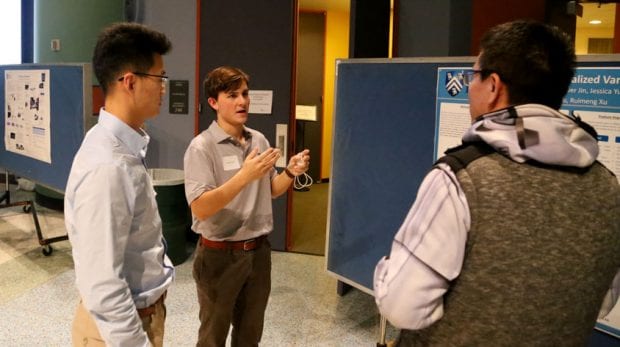 With subjects ranging from urban flooding to mouse brains, Rice students demonstrated how knowledge can be derived from data in the inaugural D2K Learning Lab Showcase.

The Nov. 28 event was sponsored by the recently established Center for Transforming Data to Knowledge (D2K Lab) and hosted by Genevera Allen, associate professor of statistics at Rice and founding director of the D2K Lab.

“Vast troves of data are being generated and collected in nearly all industries and disciplines,” said Reginald DesRoches, the William and Stephanie Sick Dean of the George R. Brown School of Engineering at Rice. “To realize the potential of this big data, we need people who can transform data to knowledge and actionable insights. These people are called data scientists.”

DesRoches said Rice has invested $45 million in a Data Science Initiative and will invest more in data science education and innovation. Through the initiative, Rice has hired seven new data science faculty members and will launch new programs such as a minor and a professional master’s degree.

“Our goal is to train exceptional data scientists by empowering our students to make an impact in their community through solving real-world data science problems,” Allen said.

The D2K Learning Lab Showcase featured students enrolled in one of the two core D2K Lab courses: the Learning Lab, in which student teams focus on semesterlong, real-world data science projects sponsored by a researcher, community partner or company; or the D2K Consulting Clinic, in which students help clients from Rice and elsewhere frame their data science problems. In the showcase competition, each of the eight teams had eight minutes to present their project.

The winning team was Neuron Tuners, who presented research exploring how the movements of mice correlate with brain activity in the visual field. “We were interested in how much of the movement-related information is encoded in the primary visual cortex,” said team member Yuyan Liu, a second-year graduate student in statistics. “This provides insights into understanding the mechanisms and functions of the brain.”

The other team members were Kevin Li, senior in computer science; Tengjiao Liu, a second-year master’s student in computational science and engineering and in statistics; Xincheng Tan, a junior in computer science and statistics; and Yuchong Zhang, a fourth-year graduate student in chemical and biomolecular engineering. Each received a $250 gift card. Their sponsor was Dr. Jacob Reimer, a neuroscientist at Baylor College of Medicine, and their Rice mentor was Allen.

Winning honorable mention was Team Illegal Dumping Prediction, which analyzed the City of Houston’s 311 helpline complaints to determine likely sites where trash would be illegally dumped. Team members Sarah Asson, David Brodkey, Richard He, Nick McMillan and Emma Min each received a $100 gift card. The team was sponsored by the City of Houston, with mentors Jesse Bounds and Steven David, director and performance consultant for the City of Houston’s Office of Innovation; their Rice mentor was Daniel Kowal, assistant professor of statistics.

The audience choice award went to Team Alzheimer’s Disease, which examined the usefulness of various computational models of mice to determine the most efficient ones on which experiments can be performed to find treatments for Alzheimer’s disease. Team members Dessy Akinfenwa, EunYeop Kim, Ami Sheth, Miten Shah and Jason Yin each received a $50 gift card. Their Rice mentor was Allen and their sponsor was Dr. Ying-Wooi Wan of Baylor College of Medicine.

The other teams were:

-Volatiliteam, which analyzed 3 1/2 years of data from the Standard and Poor’s 500 Index to predict variance in the market to better price options. Team members were Oliver Jin, Santiago Tellez, Wei Wu, Ruimeng Xu and Jessica Yuan. They were mentored by Andrew Wendorff of sponsor Belvedere Trading. Their Rice mentor was Daniel R. Kowal, assistant professor of statistics.

-Houston 311 Quality Improvement, which examined customer survey responses from those filing complaints with the City of Houston’s 311 helpline to determine what motivates positive and negative responses. Team members were Akin Bruce, Ben Herndon-Miller, Soo Bin Park, Ben Rieden and Emily Rychener. Their Rice mentor was Meng Li, the Noah Harding Assistant Professor of Statistics, and their sponsor mentor was Steven David with the City of Houston.

-Big Neuro Auditory, which examined data to identify neurons in the visual cortex of mice that respond to such auditory cues as mouse calls and human voices. Team members were Kenneth Li, Rui Qin, Sadie Richardson, Aziza Salako and Elliott Smith. Their Rice mentors were Allen and Giuseppe Vinci, the Rice Academy Postdoctoral Fellow in Statistics. Their sponsor mentor was Dr. Jacob Reimer of Baylor College of Medicine.

-Data Scientists’ Guide to the (Data) Flooding, which explored the efficacy of promoting urban parks as a way to mitigate the damage caused by flooding. Team members were JeongSu Park and Adam Strathman. Their Rice mentors were Kathy Ensor, the Noah G. Harding Professor of Statistics, and Antonia Sebastian, an academic visitor in civil and environmental engineering. Their sponsor mentor was DesRoches.

The D2K Lab is supported by a $4 million gift from Rice alumnus Kevin Harvey and his wife Catherine Harvey.